Please check your inbox and follow the link provided to confirm your susbcription.

EFU will mobilize a four-man crew to the Copperview Project within a week. Field activities will include prospecting, rock and soil sampling, and geological mapping with an initial focus on nine (9) known Minfile (BC government designation) mineral showings or occurrences. In addition, on claims located approximately 4 kilometers northwest of Kodiak’s drill hole MPD-20-004, the exploration crews will prospect for extensions of, and parallel zones to, the Conglin Creek copper showing located near the eastern claim boundary. An extensive network of logging and ranching roads allows year-round access to most target areas over the project area.

Much of the Copperview Project has seen only limited exploration activity and only a few shallow drill holes. Historic exploration focused largely on exposed surface mineral showings and several large untested copper-in-soil and gold-in-soil anomalies are known and can quickly be advanced to new near-term drill targets. With some exploration activity dating to the 1960-1970s, many historical copper intervals were not assayed for gold, representing underexplored gold potential. Company management will provide further information on pending exploration plans on the Copperview Project following a detailed review and compilation of Minfile and assessment reports and a site visit. 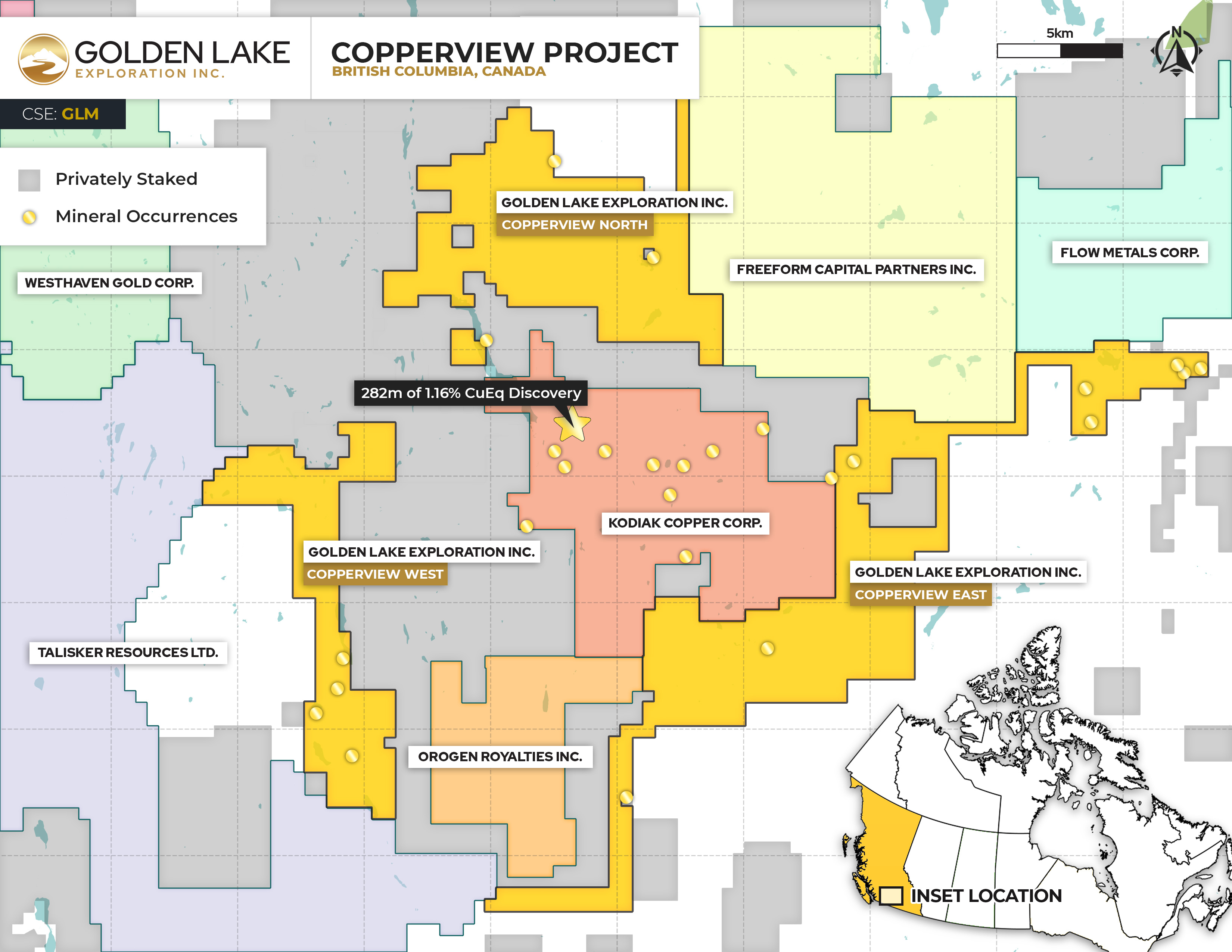 Mike England, CEO & President of Golden Lake, said: "Following the recent acquisition of the expansive Copperview Project, we are pleased to be mobilizing an experienced exploration crew that we have worked with before, to investigate mineral showings and complete a reconnaissance assessment.”

Golden Lake Exploration is a junior public mining exploration company engaged in the business of mineral exploration and the acquisition of mineral property assets. Its objective is to acquire, explore and develop economic precious and base metal properties of merit and to aggressively advance its exploration program on the Jewel Ridge property. The Jewel Ridge property is located on the south end of Nevada's prolific Battle Mountain - Eureka trend, along strike and contiguous to Barrick Gold's Archimedes/Ruby Hill gold mine to the north and Timberline Resources' advanced-stage Lookout Mountain project to the south.

ON BEHALF OF THE BOARD
“Mike England”
Mike England, CEO, PRESIDENT & DIRECTOR