Please check your inbox and follow the link provided to confirm your subscription.

Vancouver, British Columbia – April 13th, 2022, Golden Lake Exploration Inc.  (CSE: GLM) (“GLM” or the “Company”) (GOLXF-OTC) following on the heels of its new discovery at the Hamburg Mine Target (PR, March 22th, 2022, intercept of 26.37 meters averaging 5.38 grams gold per tonne (g/t Au), is pleased to announce the strategic acquisition of four patented claims from two arms-length property owners, in the heart of its Jewel Ridge property. The property acquisitions include the “Cardinalli Portfolio” and the “Lord Byron” patented claim.

The Company can earn a 100-per-cent interest (less net smelter royalty (NSR)) in the Cardinalli Portfolio through cumulative cash payments of US$550,000 plus issue a total of 1 million shares over a 48-month period. A 2-per-cent NSR will be granted to the vendors and the company will have an option to purchase 50 per cent of the NSR for $1 million at any time.

The Company has purchased a 100-per-cent interest in the Lord Byron patented claims through a one-time cash payment of US$70,000.

The principal acquisition is known as the “Cardinalli Portfolio”, consisting of three patented mineral claims called the Sentinel, the Clipper and the Golden Rule comprising approximately 23 acres (9.34 hectares). The Sentinel and Clipper claims are contiguous to, and dovetail with, other patented claims that host significant CRD (Carbonate Replacement Deposit) and Carlin-style mineralization of the Eureka Tunnel Zone that the Company has been actively exploring. Company’s drill holes have been located as close as 15 meters (see section below) to the Clipper/Sentinel patented claim boundary with intercept (JR-21-32DD) of 0.68 gram gold per tonne (g/t Au) over 51.51 meters, starting at surface. The acquisition of the Cardinalli Portfolio claims allows for near-term access for drill sites to test for on-trend extensions of the Eureka Tunnel Zone.

Historically the Cardinalli portfolio comprised part of the “Consolidated Golden Rule” property, mined in the late 1800’s and early 1900’s.  Production records are very limited, but old maps (Circa 1860’s) indicate two shafts, stoping (mining), and trenchs, trending North-northwest for over 100 meters on the Clipper claim and an adit with underground drifting and cross-cuts on the Sentinel claim. All evidence of old workings and openings have been covered by activities and dumps from the Eureka Tunnel in later years. 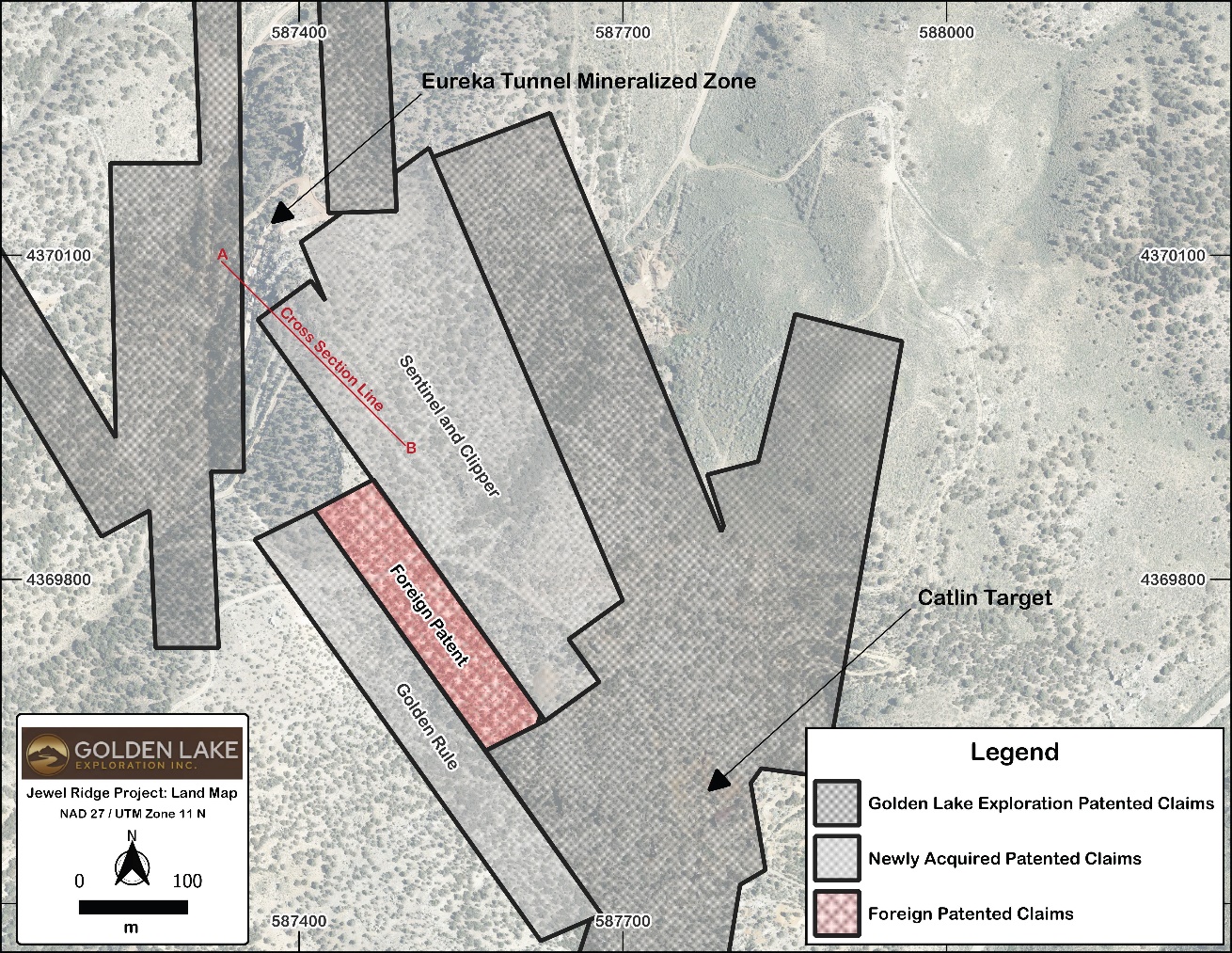 The Lord Byron patented claim is located on Prospect Ridge, approximately 600 meters west of the Cardinalli Portfolio Golden Rule patent, at an elevation of 2,621 m ASL ( 8,599 ft). The Lord Byron patented claims comprised 4 acres (1.63 hectares) and is contiguous with the Company’s A & E targets (over the Albert and Eloise patented claims). Sampling by the Company on the A&E target returned significant values from surface (outcrop and dumps) grab samples (Press Release June 26, 2020) including values up to 29.49 g/t Au, 333.0 g/t Ag, 1.35 per cent copper (% Cu), 4.00 % lead (Pb), and 9.53 % zinc (Zn). The median (based on gold values) of nine samples on the two patented claims is 2.30 g/t Au, 47.4 g/t Ag, 0.18 % Cu, 0.20 % Pb and 0.62 % Zn. Note, grab rock samples are not representative of the grade of mineralization of an occurrence, but are useful in determining prospectivity, and geological features.

The Lord Byron was staked very early in the history of the Eureka District (#16 in the district, national survey #54), with production recorded from 1885 to 1894. The A&E patented claims cover underground works, but the portal and the access roads to the target are located on the Lord Byron patented claim. The adit is currently collapsed and inaccessible, but the underground workings have been compiled by Nolan (1962 report) and are useful in refining drill targets.

Mike England, CEO, said, “The addition of these four, strategically positioned, patented claims on our keystone Jewel Ridge property, further strengthens our property position in the district, gives us immediate near-term drill targets, and represents excellent potential for both CRD and Carlin-style mineralization.” 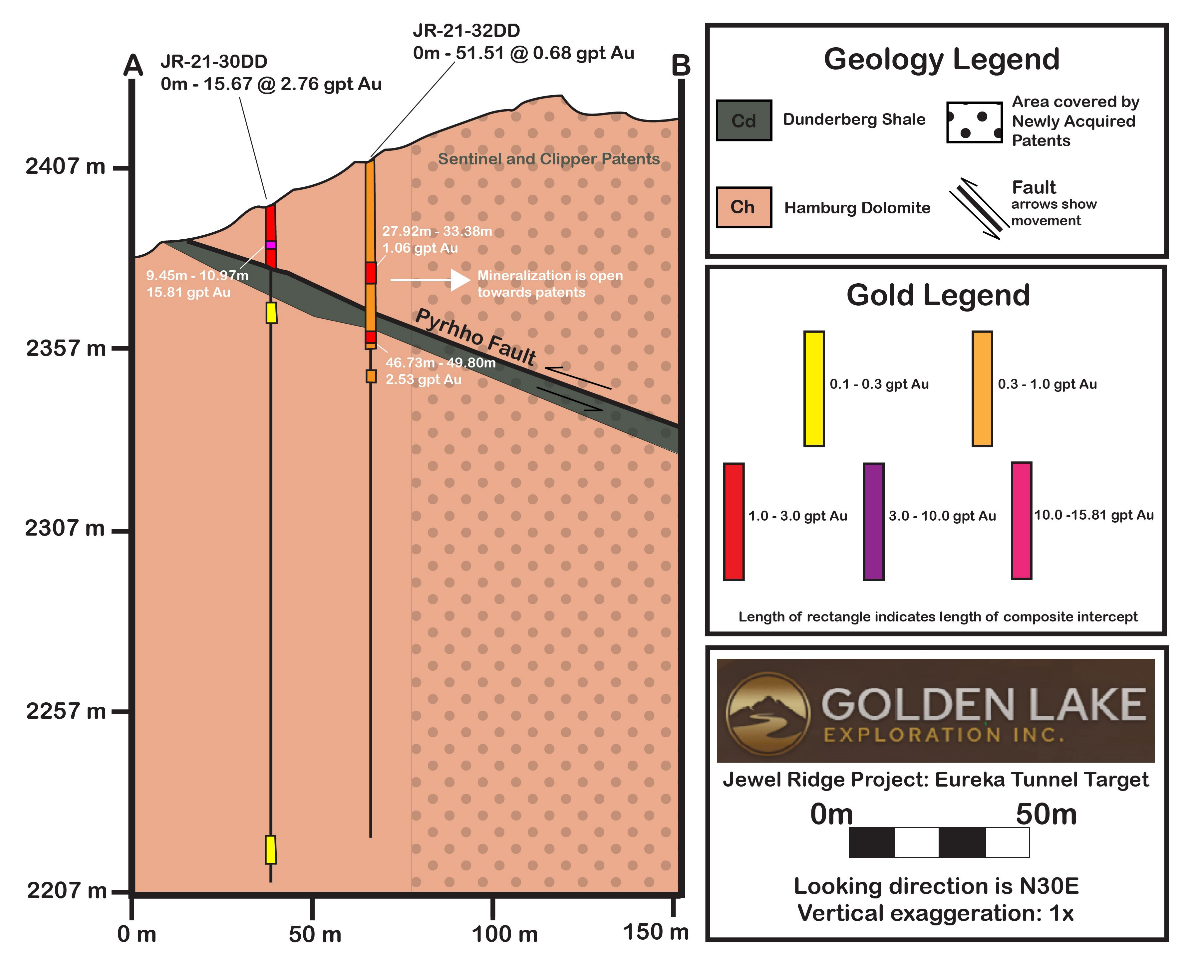 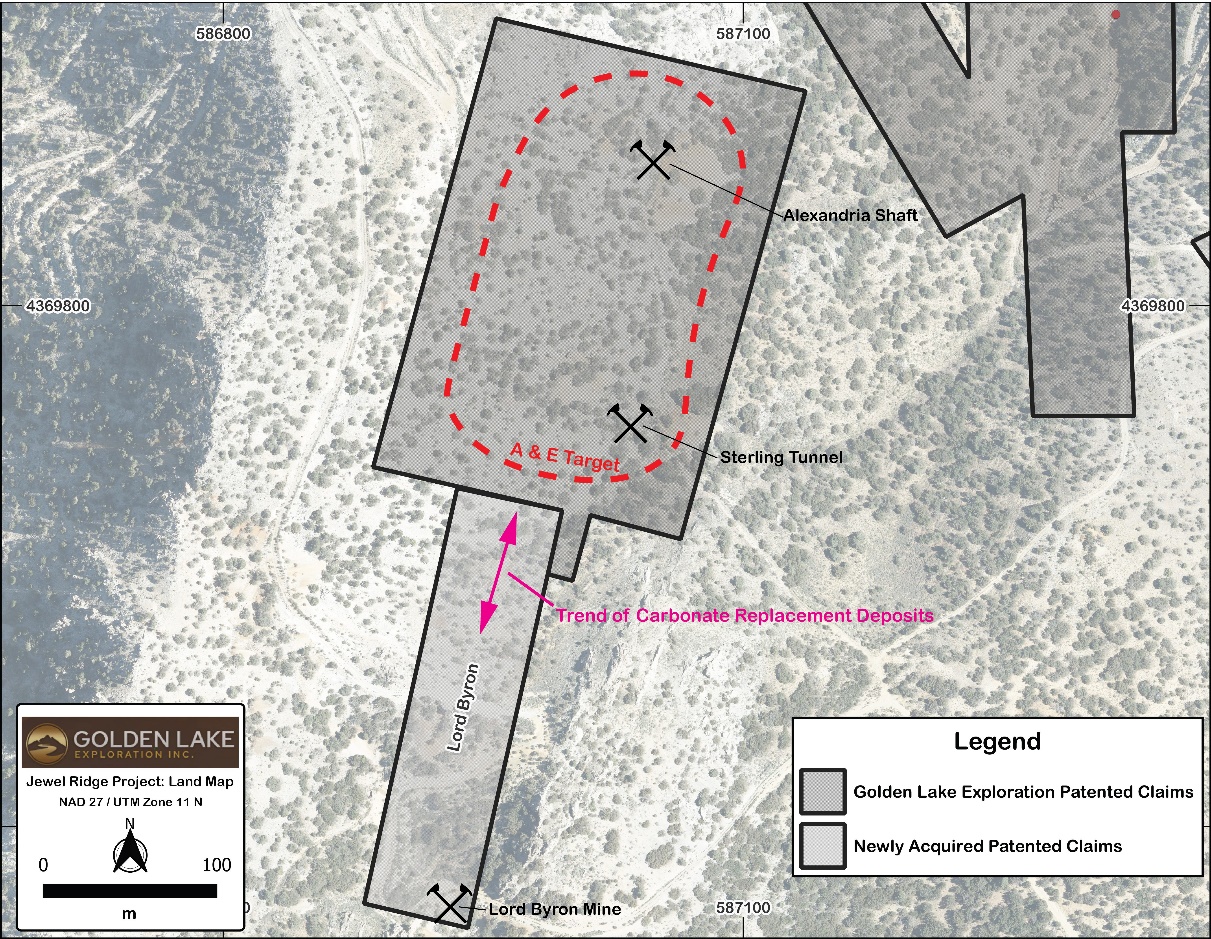 About the Jewel Ridge Property

The Jewel Ridge property is located on the south end of Nevada's prolific Battle Mountain - Eureka trend, along strike and contiguous to Barrick Gold's Archimedes/Ruby Hill gold mine to the north and Timberline Resources' advanced-stage Lookout Mountain project to the south.

Nevada Carlin-type gold deposits (CTGD) have a combined endowment of more than 250 million ounces, which are concentrated (85 per cent) in only four trends or camps of deposits: Carlin, Cortez (Battle Mountain-Eureka), Getchell and Jerritt Canyon. The Company cautions that results on adjacent and/or nearby projects are not necessarily indicative of results on the Company’s property.

Golden Lake Exploration is a junior public mining exploration company engaged in the business of mineral exploration and the acquisition of mineral property assets. Its objective is to acquire, explore and develop economic precious and base metal properties of merit and to aggressively advance its exploration program on the Jewel Ridge property. The Jewel Ridge property is located on the south end of Nevada's prolific Battle Mountain-Eureka trend, along strike and contiguous to Barrick Gold's Archimedes/Ruby Hill gold mine to the north and Timberline Resources' advanced-stage Lookout Mountain project to the south. The Company also owns a large (37.814 hectare) early-stage property in south-central British Columbia, contiguous to Kodiak Copper Corp., and Gold Mountain Mining Inc., that is highly prospective for copper-gold porphyry and mesothermal gold-bearing quartz-vein mineralization.