Please check your inbox and follow the link provided to confirm your subscription.

Vancouver, British Columbia – September 7th, 2021– Golden Lake Exploration Inc.  (CSE: GLM) (“GLM” or the “Company”) is pleased to provide an update of activities on the Copperview Property, located contiguous to the north, south, and west of the “MPD Property” owned by Kodiak Copper Corp. (“Kodiak”) (TSX-V: KDK). Field activities have continued over the summer including soil and rock geochemistry, a MT Mobile geophysical airborne survey and prospecting and geological mapping.

Samples have been collected by an independent contractor team at the Mob-8 Minfile showing (Minfile 092HNE154, BC government designation) as well as a total of 57 rock samples taken over the Deadman Lake area of the West Copperview claims. In addition, 230 soil samples were taken over the same area, with assay results pending. 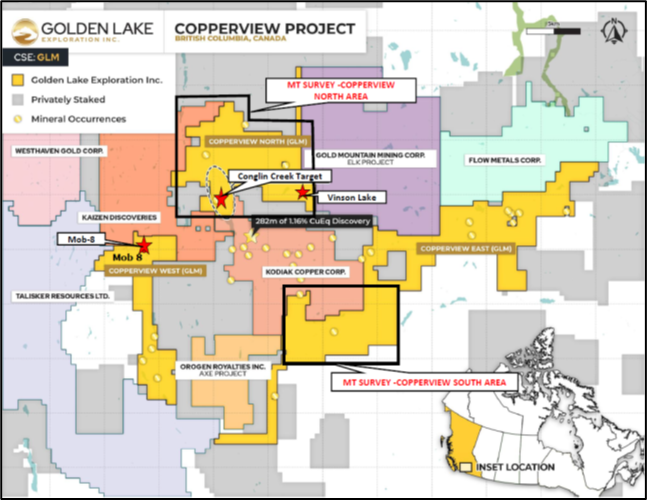 The MobileMT data is continuing to being reviewed and assessed by the Company’s contract geophysicist, however two significant targets have been identified on the North Copperview claims, the Conglin Creek Target and the Vinson Lake target.

The Conglin Creek Minfile showing area covers a strong magnetic high anomaly with a resistivity low and conductivity high, southwest and southeast of Missezula Lake. The Conglin Creek Minfile showing is located approximately 6 kilometers northwest of the Gate and Prime zones on Kodiak's MPF property. A soil geochemistry survey completed by the Company returned copper-in-soils values up to 345 parts per million (“ppm”) and anomalies (defined by 100 and 200 ppm Cu) correlate well with historic soil survey over the same area. Additional historic geochemical data was also compiled from the 1990s and the strong copper-in-soil anomaly has a strike length of greater than 3 kilometers and is open to the south-east. The Conglin Creek geochemical and geophysical anomalies will be high priority targets for diamond drilling. 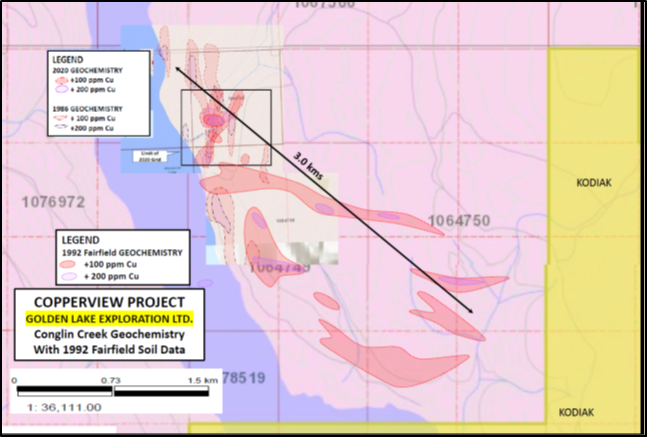 On the south-eastern portion of the North Copperview claims, the MTMobile geophysics has indicated a arcuate, north-east-trending, low resistivity anomaly with excellent depth continuity, coincident with a distinct magnetic low feature. A compilation of assessment data indicated scattered gold and copper soil anomalies in the area south and east of Vinson Lake. Recently the company has completed prospecting, geological mapping, and soil geochemistry over the geophysical anomalies and assays are pending.

Golden Lake Exploration is a junior public mining exploration company engaged in the business of mineral exploration and the acquisition of mineral property assets. Its objective is to acquire, explore and develop economic precious and base metal properties of merit and to aggressively advance its exploration program on the Jewel Ridge property. The Jewel Ridge property is located on the south end of Nevada's prolific Battle Mountain - Eureka trend, along strike and contiguous to Barrick Gold's Archimedes/Ruby Hill gold mine to the north and Timberline Resources' advanced-stage Lookout Mountain project to the south.